some doug / warlock ive had sitting around for a while

Art by @blithefool, who is, as always, super awesome.  also thanks go to @nobiliorpomis because without them, this crack ship would not be half as good as it is.

Doug had been disappearing for the better part of three weeks. On the one hand, he had told Jono that he was working on a surprise, and that was the reason, but it didn’t quiet the niggling thoughts in his head that this was Doug trying to let him down gently into a break up.  Never mind that Doug had ended up explicitly saying that he was not going to break up with Jono, it was still a thought that refused to go away from where it had burrowed inside Jono’s head. So when Doug signed that he wanted to speak to Jono, well… Let’s just say that Jono took a good minute to pull up an emotional wall before he followed Doug.

When Jono opened the door to his room, it took him a minute to process what he was seeing. Doug stood there with a guitar borrowed from the music room hanging across his shoulders by the strap. There was a soft smile on his mouth, something shy and sweet, but unnoticeable if you didn’t know how to look for it. Jono knew how, after many minutes and hours of watching.

“Most languages I’m fluent in, don’t even have to try. You know all about those. But some they… just don’t click, and I’m slower than everyone else. But I want to try.” Doug said, looking down at his hand as he strummed the guitar. “And I am trying, I promise.”

Jono remembered the incident that had preceded Doug hiding out. Let it be known now, that Doug, at one point, was objectively bad at playing the guitar. Not just un-taught, but bad. When Jono asked Doug to try to play a section of original music he had written to see how two guitars would sound…? Well, Jono’s ears still weren’t quite recovered from it.

Doug started playing that same song. It was halting and off beat, but that Doug had tried to understand something that made up a big part of Jono’s internal life? That meant everything.

Eventually, Jono held up a hand to Doug to stop and gestured for Doug to turn around with a twirl of a finger. Some of the reason that Doug was having trouble was that he was half trying to hold up the guitar from the strap not being right. Jono adjusted it, coming up behind Doug’s shoulder.

As Jono was adjusting Doug’s hand, Doug swooped. That was what Jono would call it later. A swoop. Becuase one moment he was just having his hands on Doug’s and the next he was standing stock still while Doug pressed a kiss to the scrap of skin between Jono’s ear and the top of the bandages around his face. Unexpected. Completely out of left field. Doug was lucky that Jono didn’t blow up the dorm.

It was an accomplishment, in more ways than one. ‘I’m trying’, Doug had said. Jono should have realized that there was more meaning to it than just learning the guitar. It meant touch too, both accepting it and giving it.

Sorry my Warlock is slightly creepy… 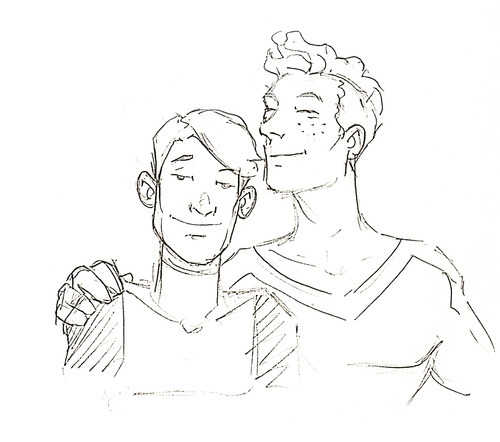 Northstar/Cypher (adult Cypher, obvs). The waaay out there one is Northstar/Simon Tam, but I’ve gotten you to do that one already. ;) 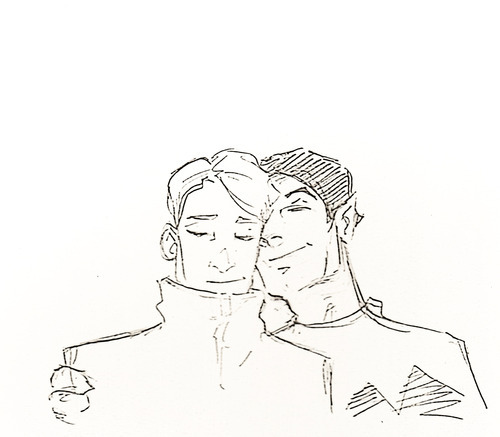 I love Doug’s oversized turtleneck. No clue how old he is in X-Factor. I put him in his 20’s ‘cause that’s what he looks like to me. So, let’s just say that’s the case in this drawing as well.